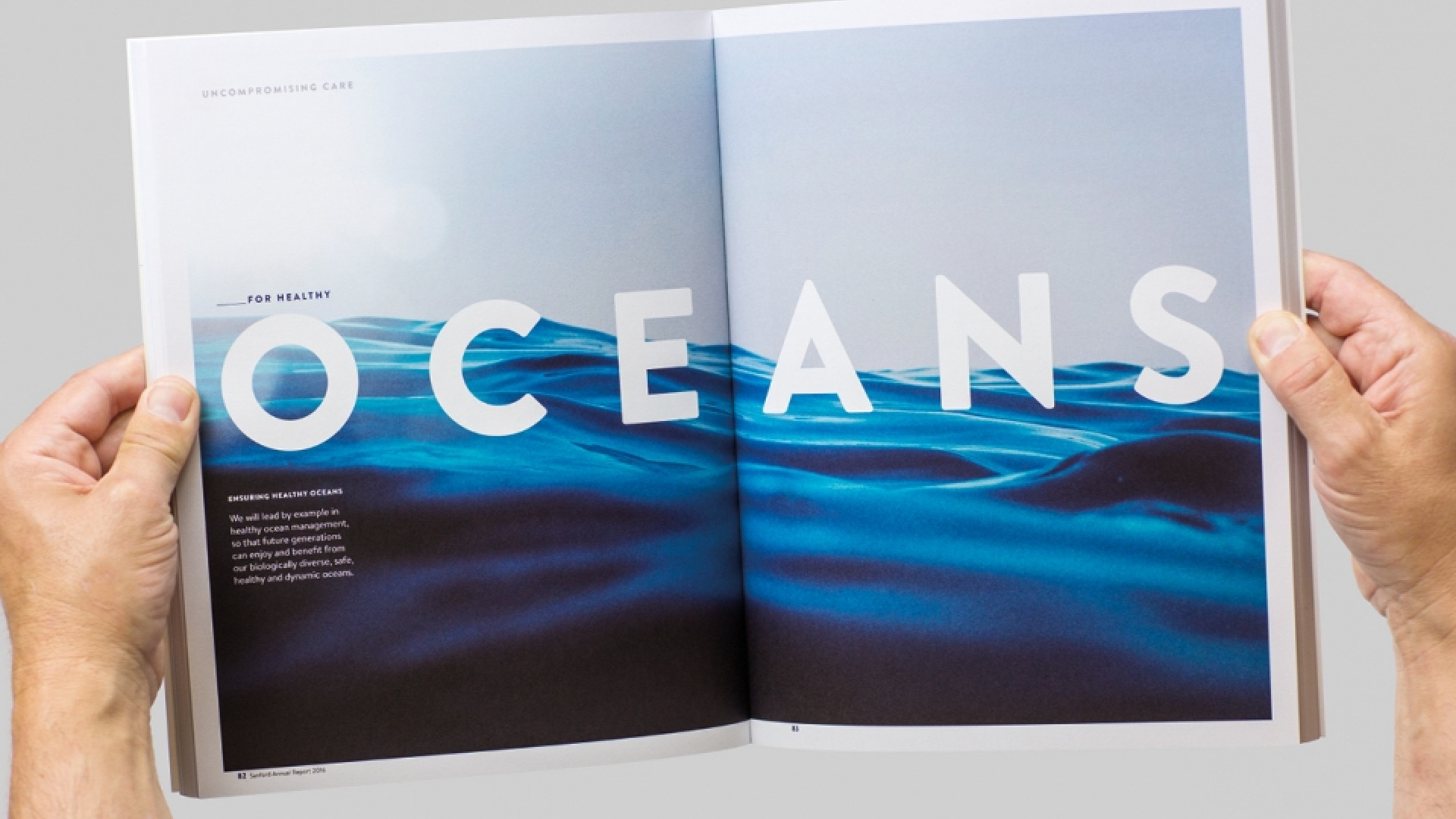 It seems that wherever we turn in corporate New Zealand, the Sanford integrated reports are held in the highest esteem and the benchmark that other companies measure their integrated reporting progress by.

We have produced all seven of the Sanford reports, starting in 2014. (And prior to that, their annual and sustainability reports since 2008.)

The 2014 report was a breakthrough. It really set a high threshold for what integrated reporting could and should be and put corporate New Zealand on notice for what future reporting expectations would be.

It’s a great time to look back at the journey. Sanford’s CEO for the past seven years, Volker Kuntzch, elected to seek a change of direction. This retrospective is as much a tribute to his visionary and care-centred leadership as it is a tale of the evolution of sustainability reporting in New Zealand.

When Volker briefed us to produce the 2014 report as an integrated one, we had little experience in the genre. We knew some rudimentary principles and looked at two or three Australian examples, but to be frank, were completely underwhelmed and felt they taught us nothing.

It was time to take a deeper dive to really understand the crux of this new way of thinking. The penny-dropping moment was when the CEO of the IIRC (International Integrated Reporting Council) visited New Zealand. He encouraged us to stop looking through the lens of the impact that Sanford had on things, and start thinking about how those things might impact on Sanford’s business in the long term if not planned for and protected. Once we looked beyond the one-way corporate citizenship thing, we were able to see the virtuous circle and what a game changer this was for business and the world.

Sanford proved to be the perfect client to apply this to. The most immediate and lasting impression of hearing Volker’s philosophy was the authenticity that was being nurtured within Sanford – his genuine care for people and the environment in particular. You could feel the soul of the company under his leadership, and that sense has continued, only today there’s a lot more embedded structure around it. And that philosophy will, in turn, protect the Sanford business for decades to come.

From the beginning, we knew that soulful storytelling was the key to sharing this authenticity. So rather than merely report data about what they were doing, we chose to dig deeper and frame a more emotive, connecting story.

Our first report was titled ‘How we see the sea’. And it set the tone for the new way they deserved to be perceived. 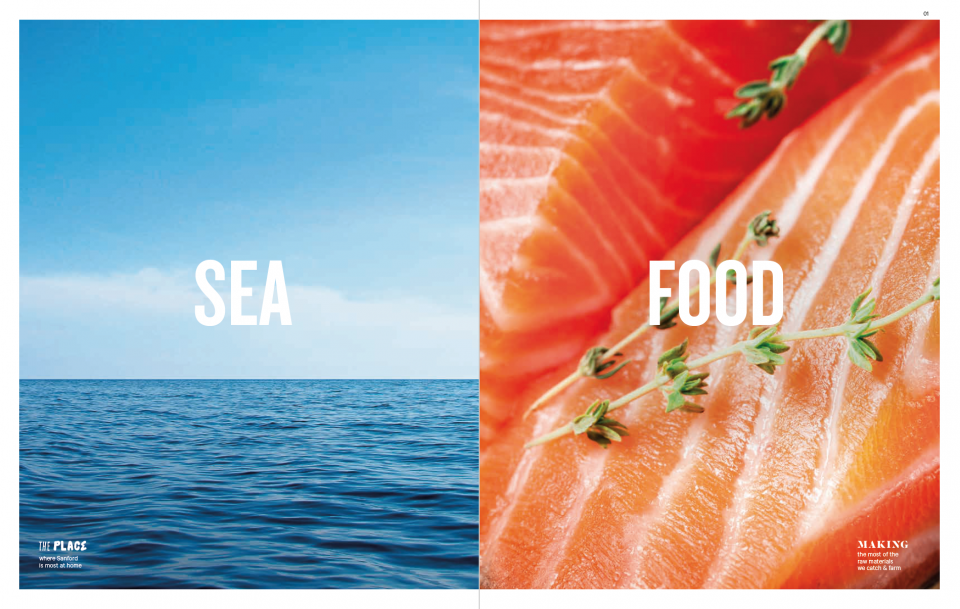 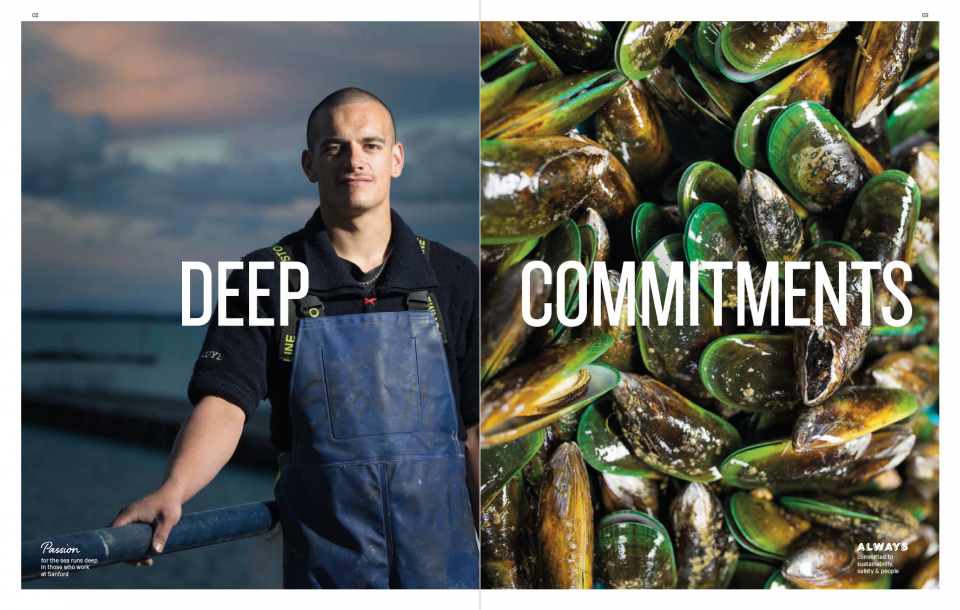 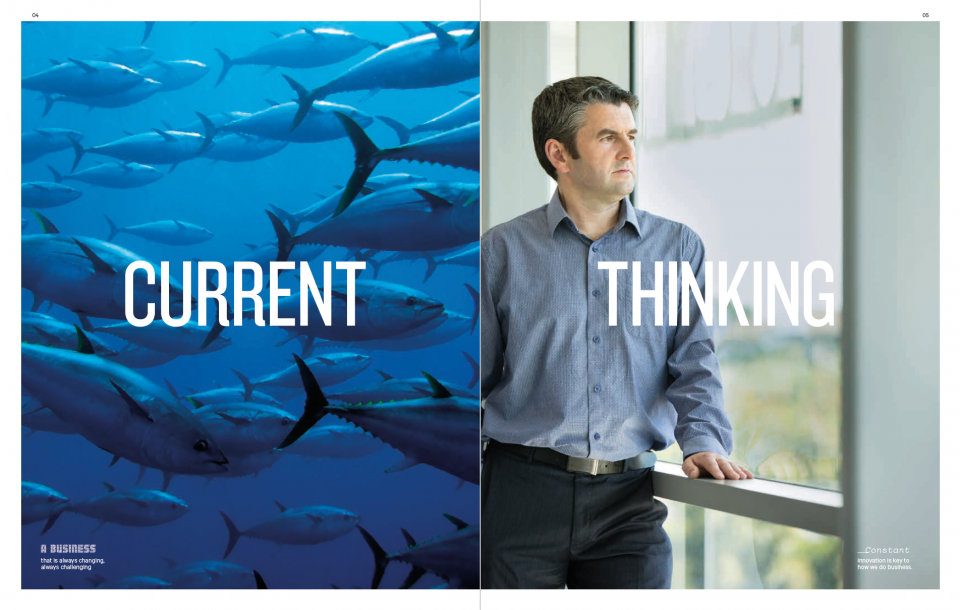 We continued storytelling journey in 2015, seeking once again to convey the grounded authenticity we found in Sanford, and embed that understanding. With reports that are content heavy, as these reports are – close on 120 pages – we strive to layer the communication, so that the core tone and messaging are conveyed at a glance, while those that want evidence have plenty to provide that assurance. 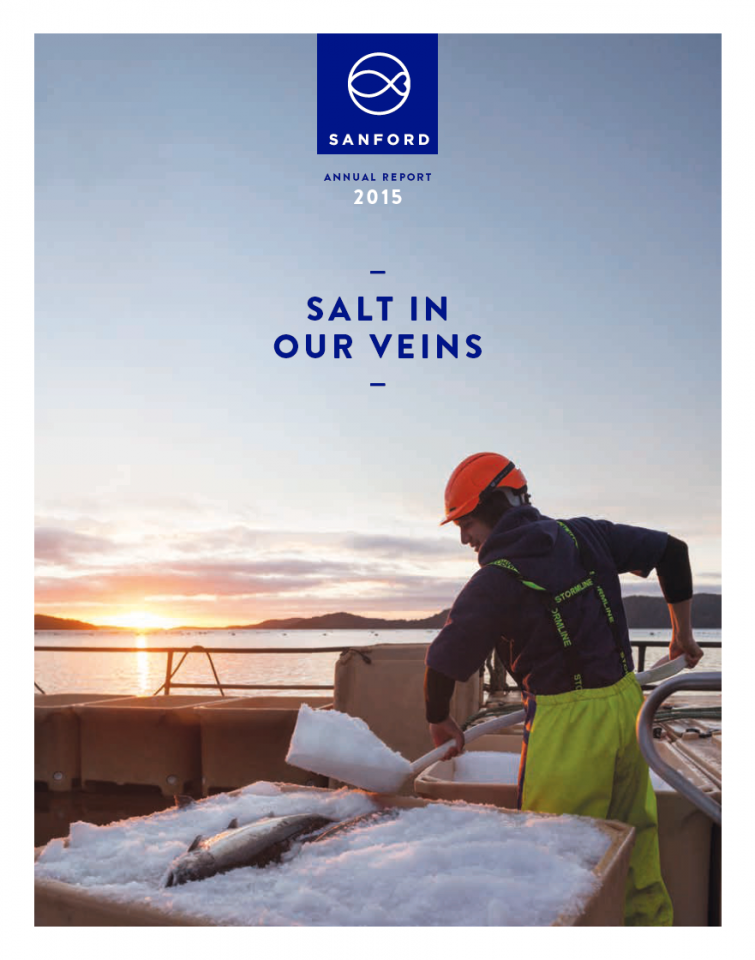 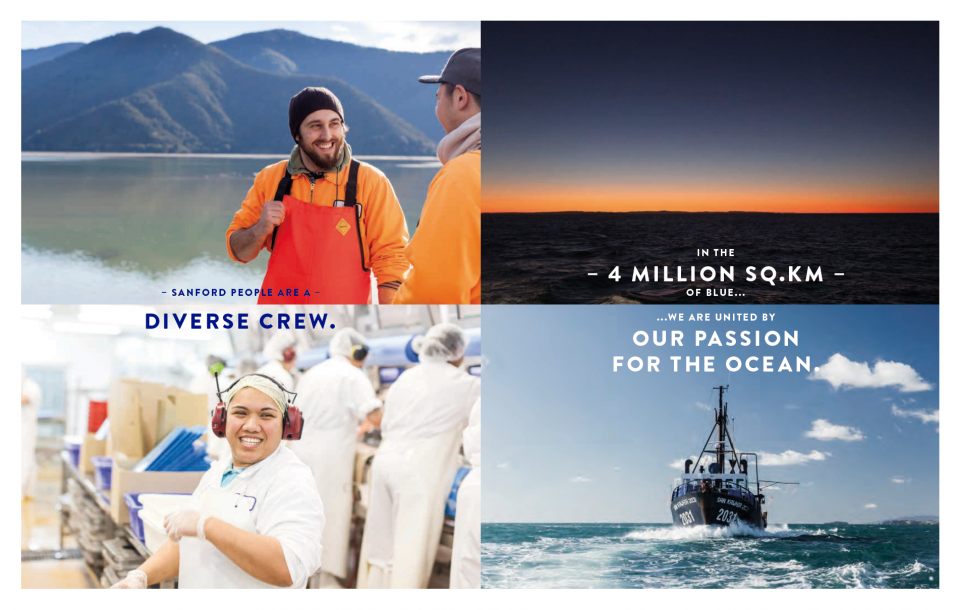 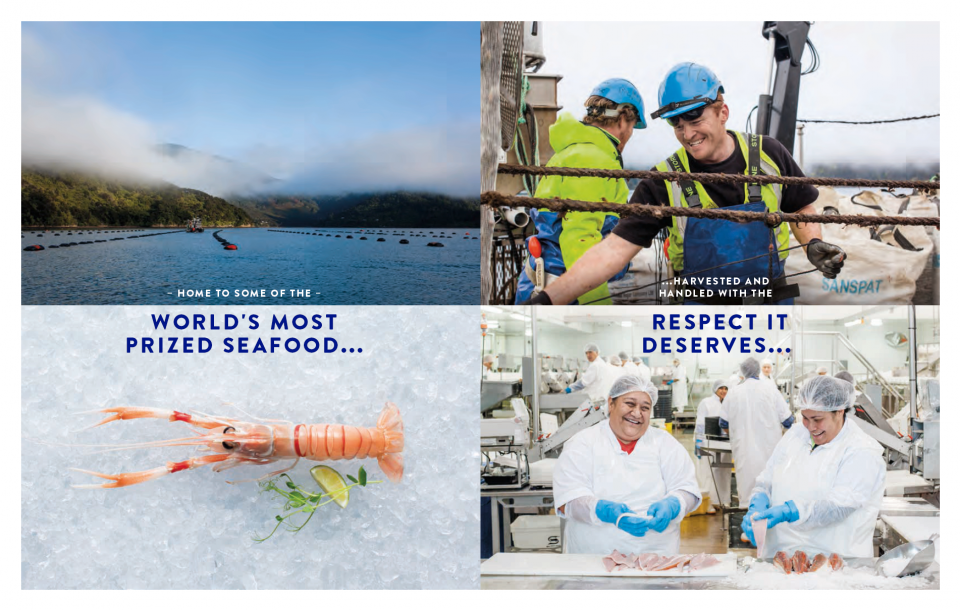 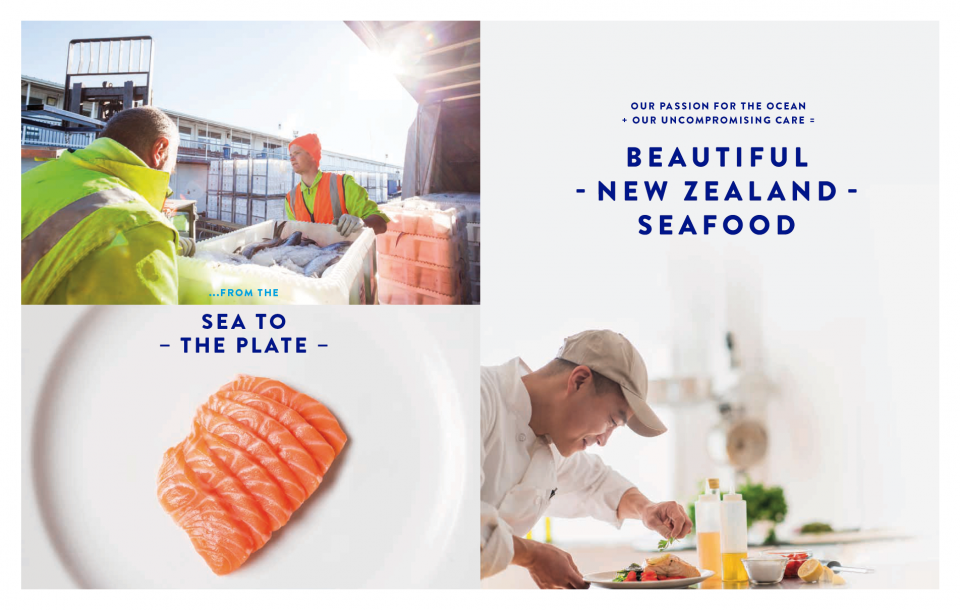 As we all gained more experience in integrated reporting, our learnings enabled our reports to become more sophisticated and the messaging more specific while never veering far from that intrepid seafaring core.

A great measure of increasing understanding of integrated reporting is the sophistication and depth of one of the central and defining elements: the Value Creation Model.

Back in 2014, our understanding of what they were meant to convey was fairly superficial and the resulting first attempt, while clear, was very simplistic. 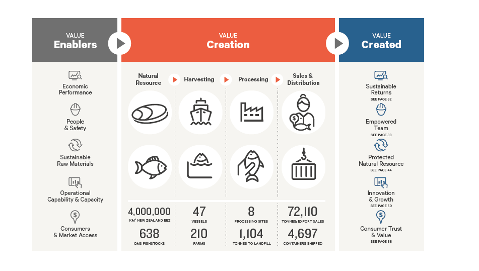 In 2015, we made it more engaging through illustration, and it is this version that seems to have set the benchmark if imitation is indeed the sincerest form of flattery. We now see versions of this illustration in many New Zealand integrated reports.

As for Sanford, they’ve evolved too. As they’ve become more meaningful with the gradual inclusion of more data, the space for illustration has become somewhat constrained. But we’ve endeavoured to retain the visual engagement while ringing the changes to keep it fresh. 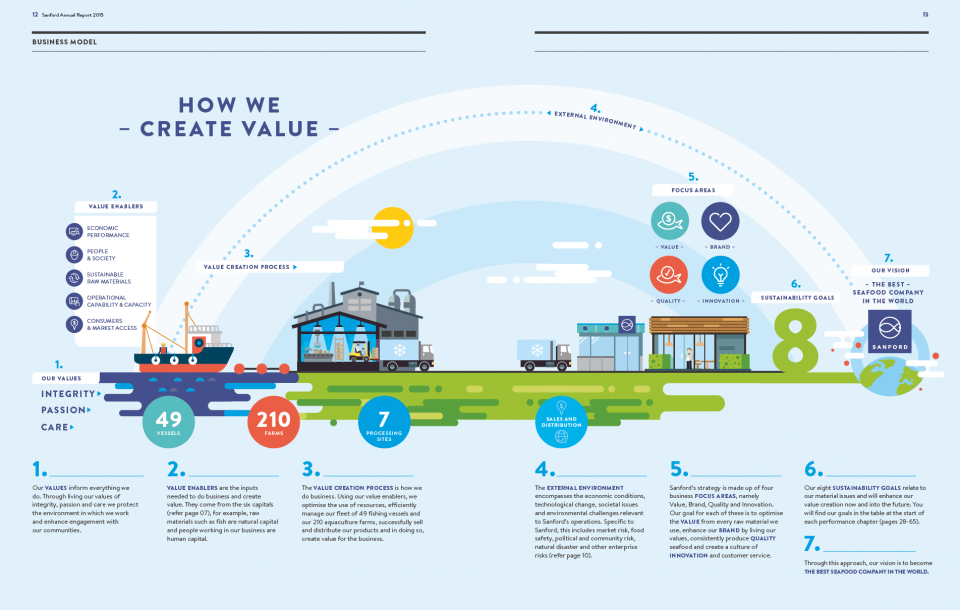 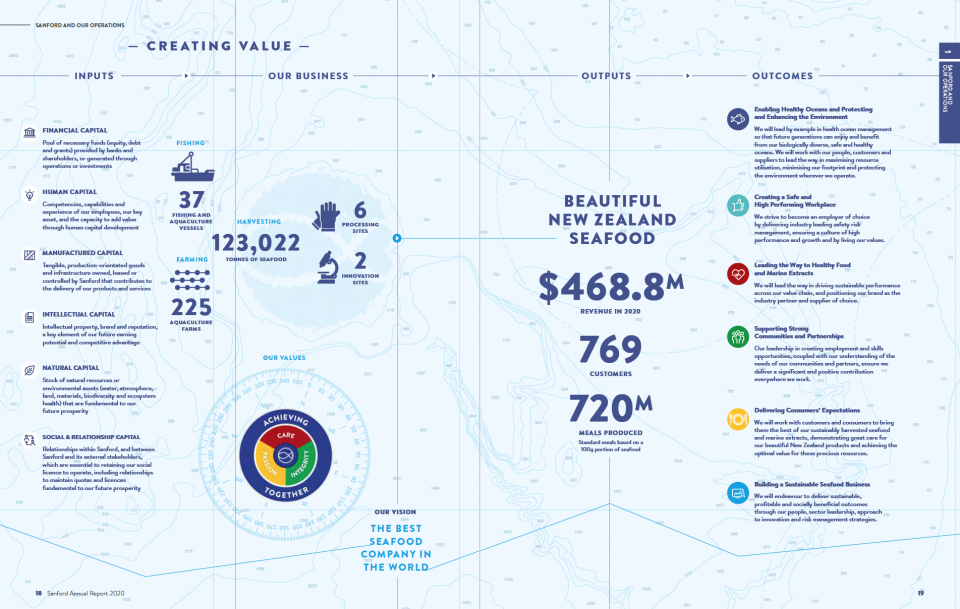 Ironically, one of the aims of integrated reporting is conciseness. But when one of your communication objectives is transparency and clear differentiation within an industry that suffers from a corporate trust issue, then full, open disclosure and over-communication is a valuable positioning tool. As Sanford has seen success in this defining positioning strategy and trust rapidly build, they have been able to reduce the page count noticeably in the last two years. But openness and transparency have never been compromised.

Awards speak to an enduring quality

Sanford have been recognised every year of their integrated report journey. Over a dozen international awards, from the New York-based ARC Awards to the international Graphis Awards to the more regional ARA Awards, thrice winning best integrated report, twice winning best sustainability report, and twice being a report of the year finalist. And this year, the inaugural NZ Integrated Reporting Award winner.

As the years have gone by, our immersive knowledge of both the spirit and mechanisms of the integrated reporting framework have grown exponentially. But the dive into the deep end for Sanford was the trigger that sparked our admiration for the extraordinary business power of integrating reporting and our desire to go deeper and deeper to better advise New Zealand businesses no matter where they are on the journey.

I have a vivid memory. Back in the early ‘80s, Auckland City Council unveiled a beautiful new public space above a new underground parking building. I…